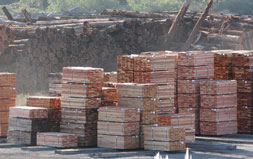 Earlier investigations had revealed significant areas of fast growing redwood in NZ, some over 100 years old, with their potential going largely unnoticed by NZ foresters.

After facing problems finding enough good quality redwood trees for planting, NZRC has developed its own tissue culture propagation system with support from Californian experts. Clones of outstanding redwood trees are now available for planting on our own land and for sale to other growers.

There was much to learn in order to successfully establish commercial scale redwood plantations in NZ. Site selection, establishment regimes and silviculture regimes are just some of the areas researched by NZRC.

Although markets for redwood lumber already exist, NZ redwood growers need to ensure their investment can be managed to capture the high prices paid.

In NZ there is increasing interest in forestry for carbon sequestration. As trees absorb carbon dioxide from the atmosphere, 'carbon credits' can be sold on the rapidly growing world carbon exchanges. NZRC is part owner of a growth model with a carbon calculator that can be used to predict the future growth of redwoods and the amount of carbon tied up in the forest.

In addition to establishing our own forests, NZRC is committed to supporting other redwood growers. We believe that NZ has a great opportunity ahead and that the whole forest industry can benefit from an established redwood industry. NZRC can offer general advice on most aspects of redwood investment and who can help you successfully grow redwood in NZ.

Extraordinary foresight by our parent company, strong ties to the largest redwood growers in California and commitment by NZ foresters and researchers have already helped to lay the foundation for one of NZ's most promising forest industries.